Answer: Which well known stadium was best know for windy conditions, damp air and dew from fog and chilly temperatures, earning less-than-flattering nicknames such as â€œNorth Poleâ€ and â€œCave of Windsâ€? 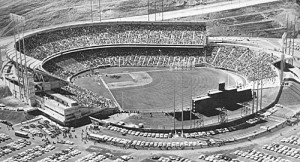 As a baseball field, the stadium was best known for the windy conditions, damp air and dew from fog, and chilly temperatures. The wind often made life difficult for outfielders trying to catch fly balls, as well as for fans, while the damp grass further complicated play for outfielders that had to play in cold, wet shoes. Architect John Bolles designed the park with a boomerang-shaped concrete baffle in the upper tier to protect the park from wind. Unfortunately, it never worked. For Candlestick’s first 10 seasons, the wind blew in from left-center and out toward right-center. When the park was expanded to accommodate the 49ers in 1971, it was thought fully enclosing the park would cut down on the wind. Instead, the wind swirled from all directions, and was as strong and cold as before. Ironically, the Giants played their last game at Candlestick under blue skies with no fog and a game time temperature of a very non-Candlestick-like 82 degrees.