DETROIT – At some stage in our lives we have all imagined where we might go in a time machine. I am fairly sure that if I had Doc Brown’s Back to the Future Delorean at my disposal I would programme it for 7 March 1896 – and aim for Detroit, just in time to see Charles Brady King putter along Woodward Avenue and become the first person in the city to drive a self-propelled vehicle.

True, the futuristic form of the Delorean might have stolen King’s thunder somewhat, but nothing could detract from his pioneering achievement. Or the fact that Henry Ford was following him. On a bicycle.

“I am convinced they will, in time, supersede the horse,” said King, speaking sagely of the new contraptions to a reporter from the Detroit Journal.

Well, he certainly got that right. Even if it did prove to be Ford who eventually surged ahead as the man whose vision for the production line paved the way to the transformation of Detroit into the place they came to call Motor City.

THE 1960 PONTIAC BONNEVILLE SPORT COUPE, CHASSIS NO. 860P21034 IS A HIGHLIGHT OF THE MOTOR CITY SALE THIS SUMMER. PHOTOGRAPH
BY TRAVIS MASSEY AND OWEN FITTER © 2015 COURTESY OF RM SOTHEBY’S.

The 35 years following the American Civil War saw Detroit expand from a town of country merchants to a centre of heavy industry creating iron, steel, rail cars, wheels and axles, all of which helped to attract an eclectic bunch of engineers, designers and inventors – not least among them Ransom E. Olds, David Dunbar Buick and Walter P. Chrysler who, along with Ford, established the car manufacturers that would become household names around the world.

But the history of Detroit during the past century has famously been one of peaks and troughs. Hit hard by the Great Depression, Motor City entered the 1950s triumphant as production lines previously used to build bombers, tanks and trucks were thrown into overdrive to meet peacetime America’s demand for large, luxurious, home-grown vehicles – only for the industry to be hit by the oil crisis of the 1970s and, more recently, by the financial downturn, which saw Detroit’s ignominious slide into bankruptcy.

Its population is now less than half of the 1.8 million who lived and worked there during the 1950s heyday, but green shoots appear to be emerging, and a rebirth is gradually taking place. Nonetheless Detroit’s status as the spiritual home of the American automobile remains unchallenged. 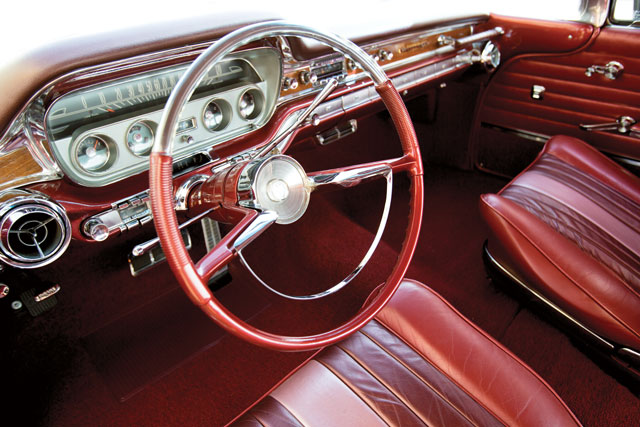 It is a combination of that anticipated return to prosperity and the inextricable link with the motor car that RM Sotheby’s celebrated last year by renaming the former Meadow Brook and St John’s car auction the Motor City sale.

Established 21 years ago, this annual July auction has come to be regarded as a snapshot of US motoring history, traditionally offering a selection of up to 100 cars of the type that made the place great and serving as a prelude to the Concours d’Elegance of America at St John’s.

Fittingly, this year’s sale is replete with cars that breathed their first breaths in Detroit,
with the inventory including a magnificent Packard Dual Cowl Sport Phaeton and a trio of convertible versions of the Cadillac Series 62, the famous “entry level” Caddy designed by Harley Earl that gave every journey a sense of occasion. 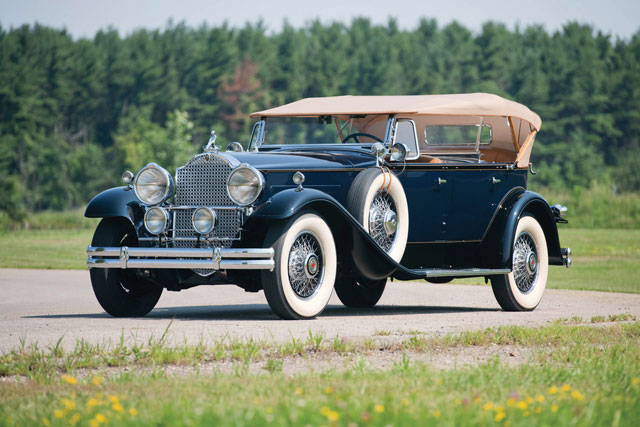 THE 1930 PACKARD DELUXE EIGHT DUAL-COWL SPORT PHAETON, CHASSIS NO. 185699 IS A HIGHLIGHT OF THE MOTOR CITY SALE
THIS SUMMER. PHOTOGRAPH BY TRAVIS MASSEY AND OWEN FITTER © 2015 COURTESY OF RM SOTHEBY’S.

There are also Buick convertibles aplenty, a La Salle (as sold through the Cadillac division of General Motors), a high-performance Pontiac Bonneville Sport Coupe from 1960 and a Monterey Sun Valley Coupe from Edsel Ford’s Mercury marque, which aimed to make luxury cars affordable.

Charles Brady King certainly started something when he went for that first drive.