MEXICO CITY – Everyone will tell you Contramar has the best seafood in town and Puebla 109 the best cocktails. But if you need fuel after sampling all the cutting-edge art and design in Mexico City’s Roma Condesa District, you must try the grasshopper sandwich.

You will find it, along with the earthworm purée, in a food cart roaming these grand boulevards, where galleries, boutiques and restaurants have set up shop everywhere from restored Art Deco and Art Nouveau mansions to ramshackle old homes.

The cart is called The Grass Whopper, and its menu features delicacies like grasshoppers crisply sautéed in chili and salt. The Grass Whopper was created by an artist, Pedro Reyes, to tease the sophisticated palates in the neighbourhood, whose turn to artisanal cuisine hasn’t yet embraced these humble creatures traditionally consumed by the poor. “The most rational thing for the planet would be to switch our protein source from meat to insects,” the artist explains at his studio in the Coyoacán district, near Frida Kahlo’s house. “I’m trying to change a cultural barrier.” 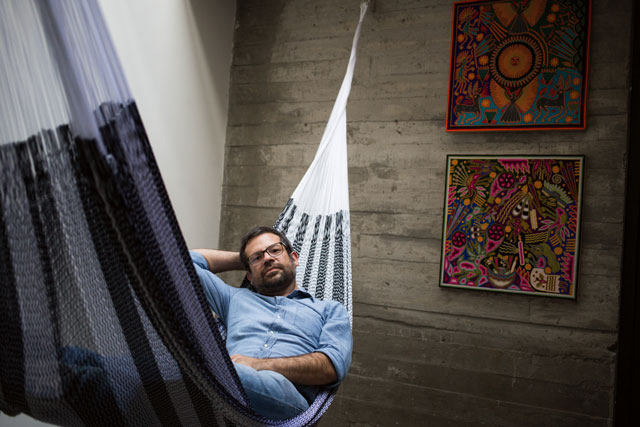 A blend of street performance and social activism whose logo is a mash-up of Burger King and a Mayan glyph, the Grass Whopper offers a literal taste of the irreverent, provocative energy coursing through Mexico City’s art scene right now. Do-it-yourself is the mantra – whether opening a gallery, starting a fair, building a museum or challenging conventional wisdom.

A communal, frontier sensibility permeates Mexico City’s expanding art scene, an instinctive turning away from international trends to highlight the unique creativity and traditions of their centuries-old culture – along with a canny sense of how to position themselves in the larger contemporary art world at a time when concepts of periphery and centre are changing. 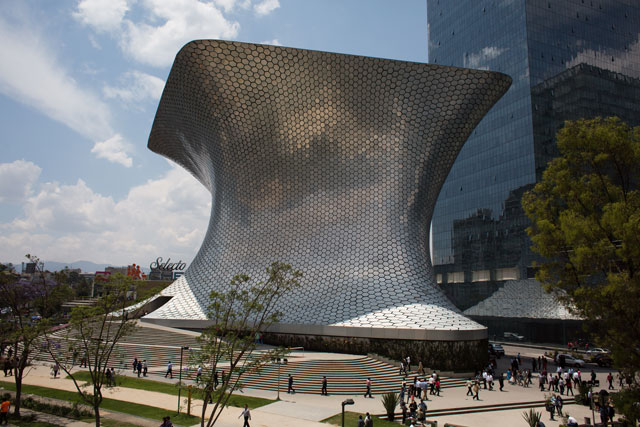 Over the past decade, the city has become a major destination on the international art circuit, with visitors lured by two new museums – the Jumex and the Soumaya, each founded by a private collector; two art fairs, the venerable Zona Maco and the upstart Material; a biannual cultural/cuisine/design festival in the Roma Condesa neighbourhood and a growing number of internationally-known art spaces.

For the culturally-oriented traveller, this transformation represents a sea change. Until recently, Mexico City’s major cultural attractions all focused on the past – its pre-Hispanic civilisations, the colonial era and the Modernist movements of the last century. Its burgeoning contemporary scene means that now you can experience the whole story. 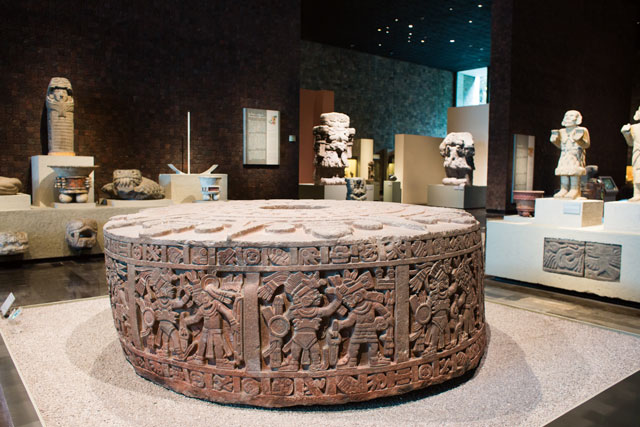 THE TIZOC STONE FROM THE AZTEC CAPITAL OF TENOCHTITLÁN IS A HIGHLIGHT AT THE MUSEO NACIONAL DE ANTROPOLOGÍA.
PHOTOGRAPH BY LISETTE POOLE. 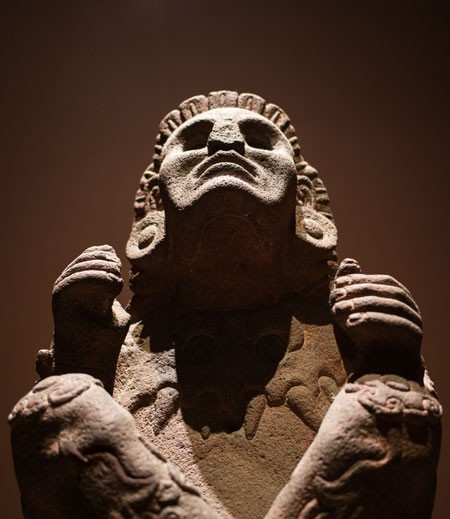 Start with the amazing Museo Nacional de Antropología, where the trajectory of Mexican creativity unfolds from man’s origins through the Maya, Olmecs, Aztecs and numerous other cultures that thrived here long before Europeans arrived. They were incredible artists, making everything from vast stone altars to ingenious toys. Mexico’s civilisations instilled their objects with power and awe, whether they were intended for prayer, play, cooking, trade, war or burying their dead and imagining the beyond. Their imagery reverberates across Mexican culture today, from giant grinning street-art skulls to the Aztec-inspired gods and monsters in Daniel Guzmán’s recent show of drawings at Kurimanzutto gallery.

The story of Mexican art continues in the city centre – underground, at theMuseo del Templo Mayor, an ongoing excavation site and museum displaying finds from the great Aztec temple, where the Emperor Montezuma performed ritual blood sacrifices until the Spanish Conquistadores arrived in 1519. Nearby, treasures in the Metropolitan Cathedral – built by Spaniards on Aztec sacred ground – chronicle the emergence of a new, distinctly Mexican style, as the nation’s artists integrated influences and materials from around the globe.

Pick up the trail at the Museo Nacional de Arte (MUNAL), which has occupied the spectacular former Palacio de Comunicaciones y Obras Públicas since 1982. Wander the grand galleries and watch as religious masters of the colonial era give way to the great landscape painters who defined the national imagination and finally the Modernists who set the national tone.

Entire itineraries can be built around the Mexican Modernists, starting in Coyoacán with the intimate Casa Azul, Kahlo’s home and studio and, in nearby San Ángel, El Museo Casa Estudio Diego Rivera y Frida Kahlo, the celebrated Modernist structures designed by Juan O’Gorman. The Museo de Arte Moderno and the Museo Tamayo, both in Chapultepec Park, are wider in scope, and the Palacio de Bellas Artes is famed for its murals by Rivera, Tamayo and Siqueiros. Don’t miss the Diego Rivera Mural Museum, with its single, must-see work,Sueño de una tarde dominical, his mesmerising 1947 mural depicting four centuries of Mexican history unfolding in Alameda Park. Allegorical and satirical, the elaborate narrative renders dreams and nightmares of generals and dictators, revolutionaries and pickpockets, prostitutes, foreigners and farmers, in a succession of culture clashes and conquests. Alongside a finely attired calavera (a depiction of a human skeleton typical of Mexico’s Day of the Dead celebrations) stands Rivera’s teacher, José Guadalupe Posada – and Rivera himself, who, in an homage to his master, is portrayed as a youth. 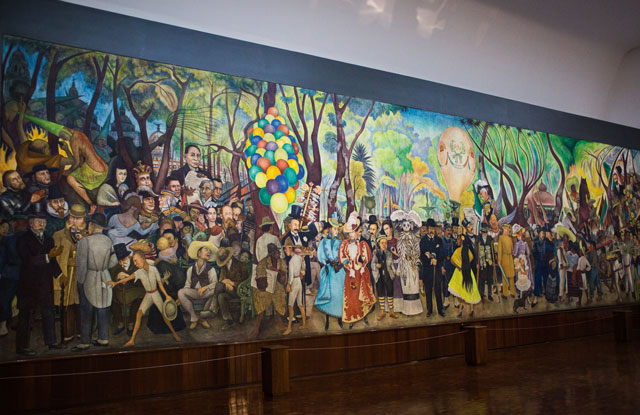 The other must-see Modernist masterpiece was finished a year later by architect Luis Barragán, in the neighbourhood of San Miguel Chapultepec. It is a home, a studio, and a total work of art. A stunning architectural statement and intimate self-portrait, Barragán’s house is a fusion of international style and local traditions, where concrete and wood support a dancing palette of colour, light and art, from ancient jugs to luminous canvases by his friend Mathias Goeritz. 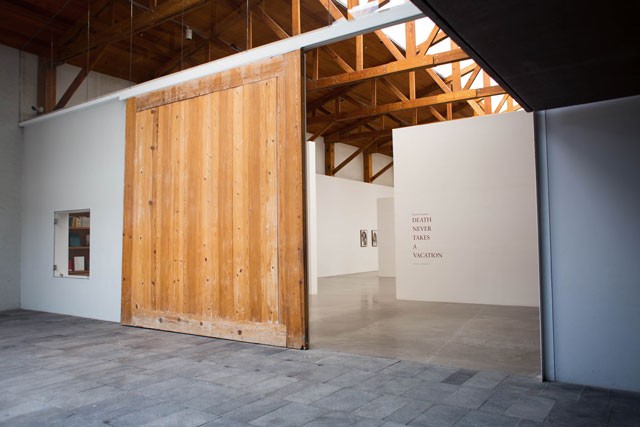 Barragán’s house is part of a cluster of Mexican Modernist buildings in a cul-de-sac on General Francisco Ramírez. Next door is Archivo Diseño y Arquitectura, a non-profit dedicated to industrial design. Across the street there’s Labor gallery, which represents several of Mexico’s best-known contemporary artists and its most notorious cultural provocateurs. The muralists’ legacy as the nation’s social conscience reverberates in the bruising cultural critiques of these formidable figures, who intentionally explore the boundaries of art and exploitation. Along with Reyes (whose musical instruments, made from weapons collected by the government, are in the back room), Labor’s roster includes Santiago Sierra, whose work addresses daily brutality and the use of power and spectacle, and Teresa Margolles, whose heart-rending installations honour victims of drug violence.

A ten-minute walk downhill you’ll find the galleries Nina Menocal, Galería de Arte Mexicano and the venerableKurimanzutto. Conceived as a nomadic artist collective by Mónica Manzutto and José Kuri in the late 1990s, Kurimanzutto evolved into a commercial gallery and then an international powerhouse. In the restored former lumberyard that Kurimanzutto took over two years ago, it shows longtime gallery members including Gabriel Orozco, Abraham Cruzvillegas, Damián Ortega and Dr Lakra y Gabriel Kuri, along with Guzmán, Minerva Cuevas and international names including Sarah Lucas and Anri Sala.

The Roma and Condesa areas offer the largest concentration of galleries, from the elegant OMR and Proyectos Monclova to the funky chic House of Gaga to the ambitious little project space Lulu, run out of artist Martín Soto Climent’s living room. San Rafael’s venues include Hilario Galguera, Lodos Contemporaneo and Yautepec, an alternative space-turned-gallery located in a former car-stereo shop. Last year its founders, Daniela Elbahara and Brett Schultz, launched Material Art Fair to support the work of others who started out on the market’s fringes; it runs concurrently with the massive Zona MACO fair in February. 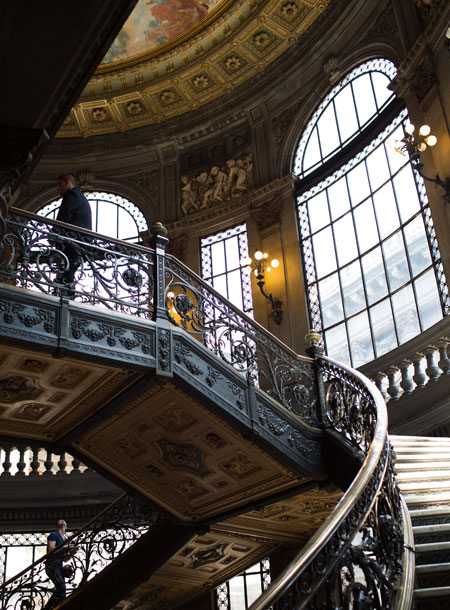 THE MUSEO NACIONAL DE ARTE IS HOUSED IN THE FORMER PALACE OF COMMUNICATIONS,
A NEOCLASSICAL BUILDING IN THE CITY’S HISTORIC CENTRE. PHOTOGRAPH BY
LISETTE POOLE.

Collecting is growing in Mexico City, from young buyers acquiring their first editions to major players on the international scene. Two top collectors are responsible for the new museums in the Polanco district. Carlos Slim Helú created the Museo Soumaya, a showcase for his collections in a glistening spiral structure designed by his son-in-law, Fernando Romero (who runs Archivo non-profit). One high-light of the galleries, featuring art mainly from the 16th to the mid-20th centuries, is the colonial-era display, mixing Mexican artists such as Baroque master Cristóbal de Villalpando with European contemporaries including El Greco.

In 2013 another new museum arrived, in a crisp geometric structure by British architect David Chipperfield. This is the Museo Jumex, launched by Eugenio López Alonso, heir to the Grupo Jumex juice fortune and a top contemporary-art collector. Dedicated to modern and contemporary art, the museum has staged several well-received shows, including one devoted to Alexander Calder’s dance sculptures, on view through 28 June. 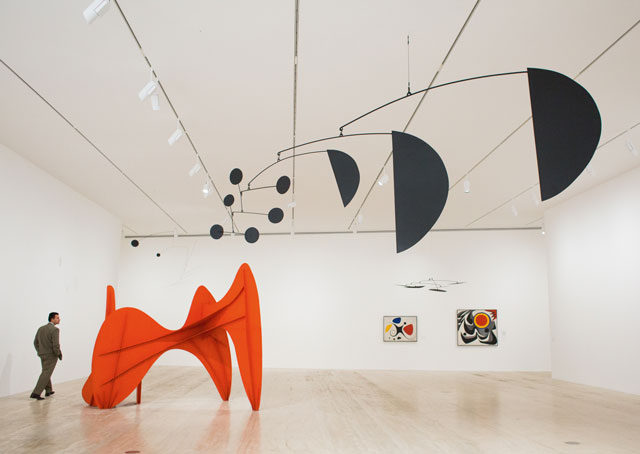 ALEXANDER CALDER MOBILES ARE THE SUBJECT OF A NEW EXHIBITION AT MUSEO JUMEX. PHOTOGRAPH BY LISETTE POOLE.

If you need sustenance after a day of museum-going in the city centre, head to the Downtown Hotel, a hip venue in a colonial building where chef Ricardo Muñoz Zurita presides over his Azúl Histórico restaurant. Upstairs, the hotel has become a showcase for innovative collaborations with indigenous craftspeople across the country, particularly weavers. Carla Fernández is at the forefront of this movement; her high-style fashion designs, made with the same squares and rectangles that have structured Mexican garments for centuries, are displayed at her boutiques here and in Roma (and recently at Boston’s Gardner Museum, which devoted its first-ever fashion exhibition to her work). 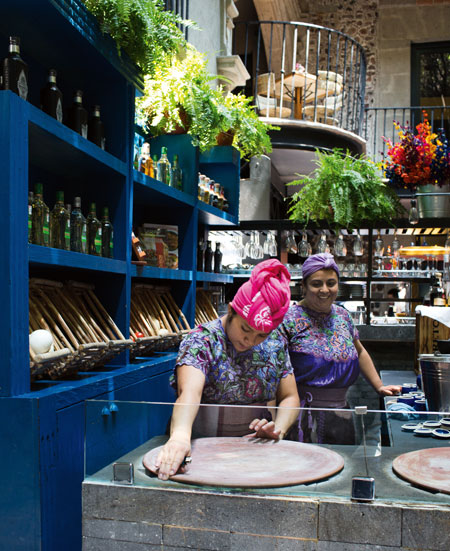 “There is a formula that states: ‘creativity=capital,’” Fernández writes in her book The Barefoot Designer. “As we grow confident in ourselves, we come to realise that we no longer have to import trends, because we already have our own language.” The observation helps to explain why it is such an exciting time for Mexico City’s creative communities. There is more art than ever to see in this historic capital – and it is easier than ever to find it.