The controllerâ€™s office just released their report for April. Below is the chart. Click here to view the entire report.

Many of the measurements have now turned positive. Employment is up. Rents are up significantly in the past 12 months. Their analysis of median sales price should be taken with a grain of salt â€“ if one separately assesses the median sales prices for distress sales and non-distress sales in SF, a different picture appears for the greater part of our market. (And median prices fluctuate up and down by month without there being much meaning to it, which is why we generally look at quarters, minimally, and then look at context as well.)

San Francisco’s unemployment rate in April fell to 8.5%, a fairly large drop of 0.3% since March on a seasonally-adjusted basis. April marked the first month that unemployment in San Francisco was below 9.0% since May, 2009.

Despite the decline in unemployment in the city, job creation in the 3-county metropolitan division has essentially stalled, with 0% job growth since April of 2010. This suggests that unemployment may be declining because of discouraged workers leaving the labor force, or because job seekers are finding work in other areas. Statewide, nonfarm employment increased by 1.0% from April 2010 to April 2011.

San Francisco housing continues on the slight downward that begun late in 2010. This double-dip in housing has largely erased the slight recovery in housing prices that the city saw in late 2009 and early 2010.

Market rents in housing continue to show growth, however, with one-bedroom asking rents on Craigslist averaging 15% higher than they were in April 2010.

San Francisco’s tourism sector continued its steady recovery in April, although hotel rates and occupancy were off the pace set in February on a seasonally-adjusted basis. Airport traffic continues to be strong, as it has throughout the recession. 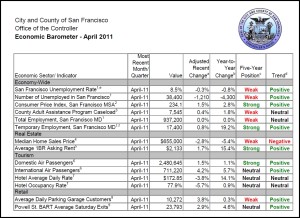