The Man Who Brought Van Gogh to China

Chinese media mogul Wang Zhongjun has been collecting art for decades. But his recent purchase of a major van Gogh signals a shift in his interests – and brings the masterwork to China. Interview by Ye Ying.

NEW YORK – Ten years ago, I could not have imagined purchasing a van Gogh,” says Wang Zhongjun. “After buying it, I felt deeply satisfied.” Such contentment is not surprising given that the van Gogh in question is a collector’s dream acquisition: a superb and rare-to-market still life of poppies and daisies that sold to Wang for $61.8 million at Sotheby’s New York last November.

Wang enjoys a high profile in China as the chairman and co-founder of the entertainment giant Huayi Brothers Media Group, which produces and distributes everything from movies and TV shows to video games and advertising in China. The van Gogh acquisition brought new attention to the businessman, who is also a painter. A longtime collector of modern and contemporary Chinese art, he has recently turned his attention to Impressionism. Wang’s collection is dispersed across his various residences in Hong Kong, Los Angeles and in Beijing, where Ye Ying spoke with him about his path as an artist and a collector.

First, I want to know a little about your background. How did your art training influence your collecting? 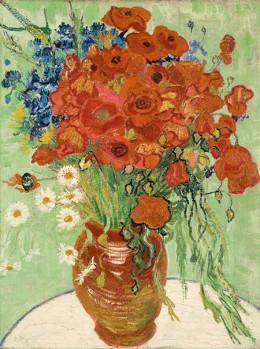 My relationship with art began when I was just a child. Starting in third grade, I took painting classes at the Beijing Children’s Palace. I was already convinced that nothing was more wonderful than painting. It wasn’t until college that I received more formal art instruction again. Everything we learned in college was in the vein of Socialist Realism.

When did you begin collecting art? What was the first piece you acquired?

I hit my first fortune around 1998 and purchased the paintings of several classical artists like Luo Zhongli, Ai Xuan and Wu Guanzhong. This collecting period was closely related to my art education.

Gradually, my tastes evolved. Around 2000, I began collecting sculpture. In the early 2000s, Chinese contemporary art began picking up, but the prices were still very low and I started buying. A series of more modern renovations I was doing on my home made me wonder if it wouldn’t be interesting to have some Fang Lijun paintings hanging on the walls.

I started purchasing Impressionist works only in the past three or four years. I’ve acquired a few paintings by Renoir and Cézanne. The most thrilling was the van Gogh I bought last year. It was a higher-priced, very important museum-quality painting.

My collecting path hasn’t been a direct route, and has no strong sense of destination. But it has evolved in concert with my aesthetic sensibilities.

You’re a businessman, as well as a collector. You also paint. How do you view these different identities?

A while back, an art catalogue featured an interview with me, and it mentioned that my friends in the industry have described me as an unusually talented artist and renowned businessman as well as an art collector. The first two labels, I’ll take. The figures support the claim that I’m a successful businessman. Taking the company from nothing to what it is today – there’s no need for modesty. As for being an artist – even less need for modesty there. My paintings are quite pleasing to the eye. But being called a collector, this is the least tenable label. I’ve met people who have devoted their whole lives to art collecting, who passionately throw all of their energy into the enterprise and have acquired scholarly knowledge. I’m not like them at all. 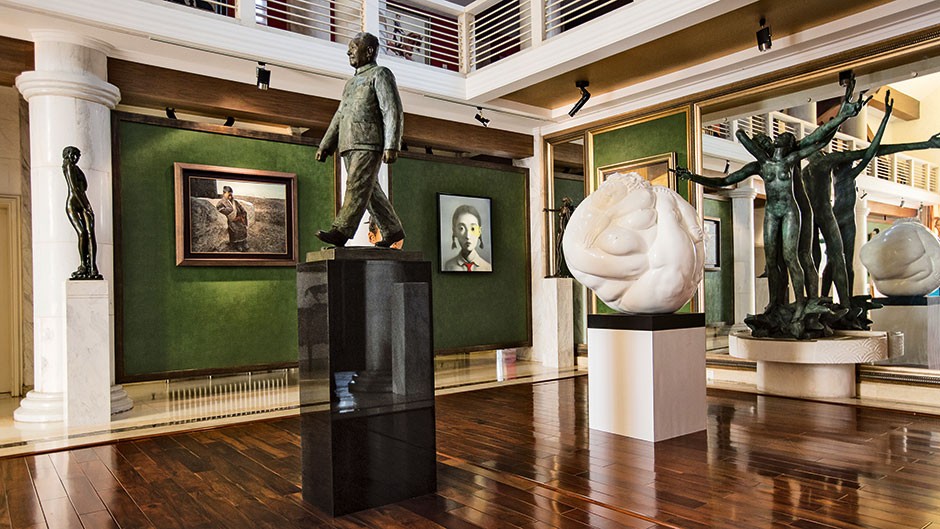 IN HIS BEIJING HOME, WANG DISPLAYS HIS COLLECTION OF MODERN AND CONTEMPORARY CHINESE ART. PHOTOGRAPH BY MATTHEW NIEDERHAUSER.

Then is your collection guided primarily by personal intuition?

Yes. The way I buy things is quite casual, even the van Gogh. It was during the preview exhibition at Sotheby’s that I felt I wanted to have the painting; the impulse simply came. Van Gogh’s name, combined with the fact that it has been years since a piece like this one has been on the market, presented me with an opportunity. But it wasn’t essential that I have it, and if the price were higher, I probably wouldn’t have purchased it. After buying it, I felt deeply satisfied. To have something like this in one’s life is very worthwhile.

What was the earliest piece of Western art that you acquired?

It was probably a Morandi. I really enjoy the still quality of his paintings. I was able to appreciate this kind of beauty early on, but back then I wasn’t as hungry, nor as rich.

“AFTER BUYING IT, I FELT DEEPLY SATISFIED. TO HAVE SOMETHING LIKE THIS IN ONE’S LIFE IS VERY WORTHWHILE. ”

Which other Western artists are you particularly fond of today?

In addition to Cézanne, I’ve also purchased works by Monet, Renoir and Pissarro, but not many, because each is quite expensive. I don’t buy paintings every year – at this level, it’s impossible to be too whimsical about it, unless I were to have more money. I am not yet at that level.

Your fondness for Van Gogh is directly related to your background and your aesthetic values, isn’t it?

In recent years, when I’ve visited art museums, my favourite works to look at have been those by van Gogh. I’ve mulled over why it is that I like him so much. In junior high, my quick black-and-white sketches of mountains and of houses resembled van Gogh’s works. His style very much aligns with my sensibilities toward painting.

What are your plans for the Van Gogh that you purchased?

It is currently in my home in Hong Kong. Since it is the first work of such importance to be purchased by a Chinese national, some art museums have asked whether I might loan it for a travelling exhibition. I’m not against the idea, but it needs to be planned well, in a way that respects the painting. I like having the painting at home and inviting friends over to see it, but I don’t see a problem placing it in an interesting art museum in China and allowing more people to enjoy it.

Do you have any plans to add to your collection?

If I hadn’t gone to Sotheby’s exhibition preview in Hong Kong, then this van Gogh painting and I might never have crossed paths. After purchasing the picture I realised that since I like it so much, and since paintings on the level of this one can inflect my mood so powerfully, it’s quite worth it to bring them into my collection.

Should I purchase a Modigliani? He’s an artist I am particularly fond of. Or a Picasso? For a while I didn’t really like his work, but after going to many exhibitions, I realised that he really has a unique charm. So perhaps I might purchase a Picasso or a Modigliani, but these aren’t plans, just a thought in the moment. 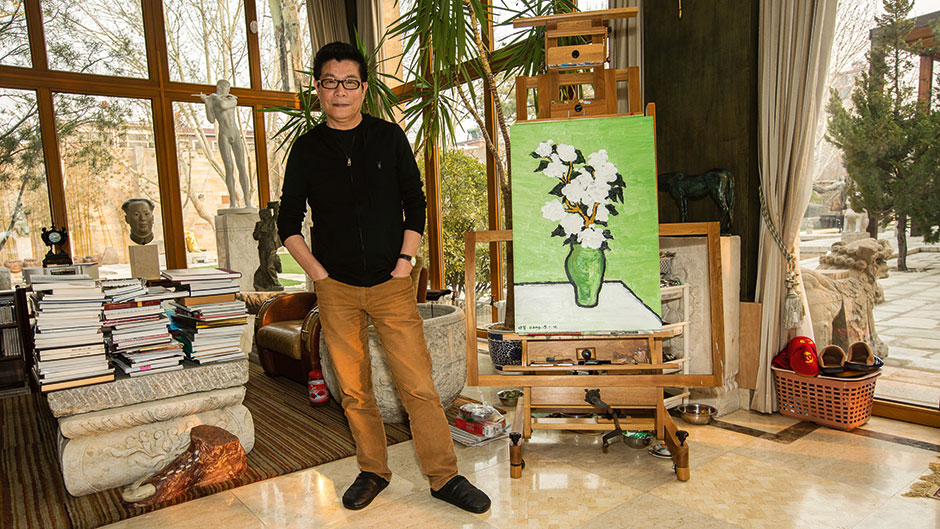 WANG WITH ONE OF HIS OWN STILL LIFE PAINTINGS. PHOTOGRAPH BY MATTHEW NIEDERHAUSER.

Have you observed that more Chinese are collecting Western art recently?

The influence of Western art on Chinese culture and art has been enormous. In China, virtually everyone has heard of van Gogh. But the postwar artists like Mondrian or Pollock, these names have yet to imprint themselves into people’s hearts the way the Impressionists have. China’s basic cultural education is superb. So art very easily makes its way onto the horizon of the Chinese people. The wealthy in China are also aesthetically discriminating.

China is experiencing a boom in private galleries. what is your take on this?

I think this was an inevitable trend. How else should the elite in China spend their money? America has so many art galleries  built by various families. This sort of contribution is another way of giving back to society. It’s a positive way of thinking, but I currently don’t have plans to do this sort of thing. I’m still painting myself, and all of the income I make from selling my art I donate to charity. This gives me great pleasure, and it provides me with motivation to paint.

What kind of influence have your collection and your artistic knowledge had in the Chinese business world?

Pretty large, actually. Most of my friends are in the business world, and many of their first paintings were purchased through my introduction or encouragement. Some even entrusted me to make purchases for them. They are avid learners, and some of them call themselves my students, but really, they’ve come a long way already.

The artist Zeng Fanzhi once hosted an exhibition of mine. He said my work was pretty good, and that I ought to have an exhibition. The title he chose was Zhongjun and His Friends. He said, “I think you’re very influential in that circle of yours. A lot of the people around you only got into collecting because of you.”

What sort of meaning does collecting have with respect to your life?

With the same amount of wealth, some people might prefer to eat, drink, take vacations. Some people might get more enjoyment from purchasing a private plane; it brings them more freedom and saves time during travel and work. And some people simply want to fall into a reverie, cigar in hand, staring at a painting.

Ye Ying is the editor of The Art Newspaper China and author of a book on Beijing’s 798 art zone.  Article translated from the Chinese by Breanna Chia.