What Costs How Much Where in San Francisco

The first group of statistics below (in table format) apply only to non-distress home sales with at least 1 car parking, as reported to MLS. Distress sales â€“ bank-owned property sales and short sales â€“ typically sell at a substantial discount due to condition-of-property issues and/or deal-aggravation issues, and if included in the analysis, would reduce the median sales price and average dollar per square ($/sq.ft.) figures in certain neighborhoods. (Distress sales, though occurring everywhere in the city, are generally clustered in less affluent neighborhoods and in the lower price ranges.)

The average size of homes vary widely by neighborhood: for example, the average size of a 4-bedroom house in Pacific Heights is much larger than one in Noe Valley. Besides affluence, the era and style of construction often play a large role in these disparities. Some neighborhoods are well known for having â€œbonusâ€ bedrooms and baths built without permit (often behind the garage). These additions can add value, but being unpermitted are not reflected in average dollar per square foot ($/sq.ft.) figures.

If a price is followed by a â€œkâ€ it references thousands of dollars; if followed by an â€œmâ€, it signifies millions of dollars. Sales unreported to MLS are not included in this analysis, and where abnormal â€œoutliersâ€ were identified that significantly distorted the statistics, these were deleted as well. Please see the definitions and caveats at the end of this report. 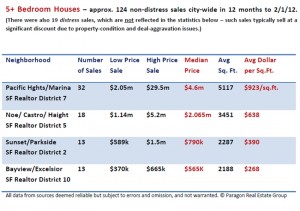 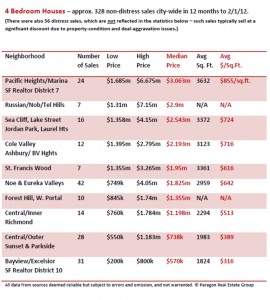 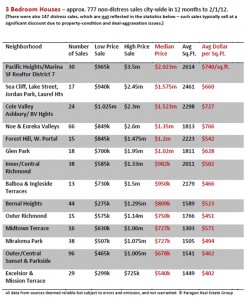 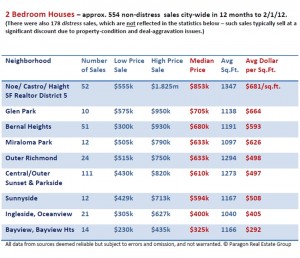 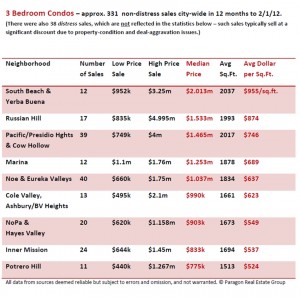 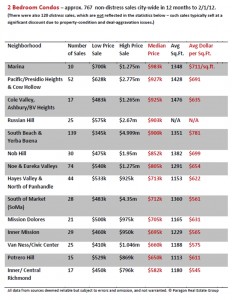 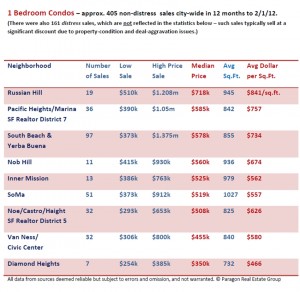 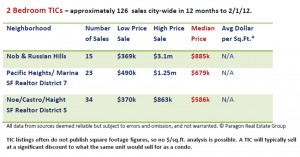 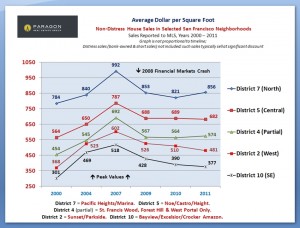 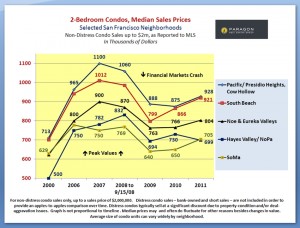 The MEDIAN SALES PRICE is that price at which half the properties sold for more and half for less. It may be affected by â€œunusualâ€ events or by changes in buying trends, or seasonal trends, as well as by changes in value.

Low Price & High Price are self-explanatory, but the low price might be for a property that needs significant work just to be habitable. Within a single neighborhood, it is possible for the low and high prices to be millions of dollars apart â€“ the difference between a small, dark 2-bedroom condo above a Laundromat, and a lavishly appointed, full-floor, 2-bedroom penthouse with spectacular views in a prestige high-rise.

DOLLAR PER SQUARE FOOT is based upon the homeâ€™s interior living space and does not include garages, storage, unfinished attics and basements; rooms and apartments built without permit; decks, patios or yards. These figures are typically derived from appraisals or tax records, but can be unreliable, measured in different ways, or unreported altogether: thus consider square footage and $/sq.ft. figures to be very general approximations. Generally speaking, about 60-80% of listings report square footage, and dollar per square foot statistics are based solely on those listings. All things being equal, a house will have a higher dollar per square foot than a condo (because of land value), a condo will have a higher $/sq.ft. than a TIC (quality of title), and a TICâ€™s will be higher than a multi-unit buildingâ€™s (quality of use). All things being equal, a smaller home will have a higher $/sq.ft. than a larger one. The highest dollar per square foot values in San Francisco are typically found in upper floor condos in prestige buildings with utterly spectacular views.

The AVERAGE SIZE of homes of the same bedroom count may vary widely by neighborhood: for example, the average size of a 4-bedroom house in Pacific Heights is much larger than one in Noe Valley; and the average of a Marina 2-bedroom condo is larger than one in South Beach. Besides the affluence factor, the era and style of construction often play large roles in these disparities.

Some neighborhoods are well known for having additional ROOMS BUILT WITHOUT PERMIT, such as the classic 1940â€™s Sunset house with â€œbedroomsâ€ and baths built out behind the garage. These additions often add value, but being unpermitted are not reflected in $/sq.ft. figures.

Many aspects of value cannot be adequately reflected in general statistics: curb appeal, age, condition, views, amenities, outdoor space, â€œbonusâ€ rooms, parking, quality of location within the neighborhood, and so forth. Thus, how these statistics apply to any particular home is unknown.

In real estate, the devilâ€™s always in the details.

Statistics such as these are generalities, subject to fluctuations due to a variety of reasons (besides changes in value). Average figures in particular may be distorted by a few sales substantially higher or lower than the norm, especially where the sample size is small. Generally speaking, the fewer the sales, the less reliable the statistics. New-development condo sales not reported to MLS â€“ of which there are quite a few in San Francisco â€“ are not included in this analysis.

All information herein is derived from sources deemed reliable, but may contain errors and omissions, and is subject to revision.