When homes don’t sell in a hot market

Even in the Bay Area, where it seems like homes are snapped up before stagers have finished arranging that last bowl of lemons, there are properties that have been on the market for months or even years.

In Santa Clara County — where homes average 22 days on market — there were 124 listings older than six months, including 48 older than one year, as of last week. An $8 million estate in Los Gatos has been on the market for seven years. In San Mateo County, 57 homes have been listed for more than six months.

Listings older than six months make up only 5 to 6 percent of total homes for sale in those counties, and some are under contract, waiting to close. But you still have to wonder: What’s wrong with these places?

The Chronicle looked into some of the Bay Area’s oldest listings to find out, and to see whether stale listings present an opportunity for frustrated buyers in this overheated market.

Listing agents offered various reasons why homes don’t sell — outdated kitchens and baths, tenants, too many stairs, no parking, road or train noise, or houses that were over-improved for the neighborhood. But homes with such flaws sell all the time, if they are priced right. 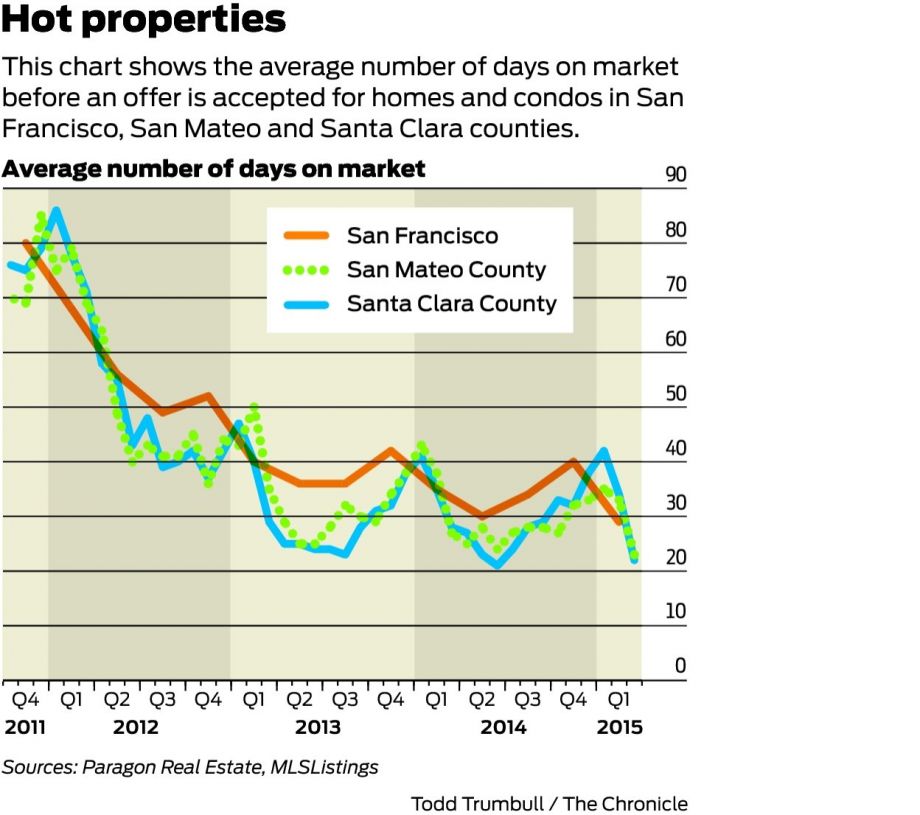 “If a home is lingering, it’s the wrong price for the condition of the house,” says Eric Wong, a Realtor with Daniel Winkler & Associates.

Wong represents a home on Addison Street in Berkeley that has been listed at $1,395,000 for 202 days. The owner expanded and renovated the six-bedroom, five-bath property and has it rented out, mostly to graduate students.

“With a property like this, it’s just about the numbers. Do the rents make sense for the price? They don’t,” Wong said. But $1.4 million is the number the owner wants and he’s willing to wait, especially since he’s getting a good amount of rent.

“Eventually the market will get to his price,” said Wong’s boss, Daniel Winkler. He admits that Berkeley’s rent control laws could be an issue, but says turnover is frequent, so rents don’t fall too far below market.

Tenants can also make homes hard to show, or nearly impossible in the case of 25 N. Railroad Ave. in San Mateo, on the market for 3½ years. About four years ago, the tenants signed a two-year lease with an option to buy, but when the lease was up, they couldn’t purchase it, listing agent Mike Vigo says.

The home is now rented by a nonprofit to house people in its alcohol and drug treatment program, “so I can’t just have people walking through,” Vigo said. He gets lots of interest, but can’t show the interior until “we have a signed agreement, contingent on their ability to inspect the property.”

The $1.25 million asking price sounds low for a six-bedroom, five-bath home with tons of parking on a 9,800-square-foot lot — if you don’t mind living across from the Caltrain tracks.

In Santa Clara County, 27 of the homes listed for more than a year are short sales, where proceeds from the sales would not pay off the debt. Of these, 23 are in contract but waiting for lender approval. “There is almost no reason for lenders to cooperate because the market is moving so fast,” said Dale Walsh, vice chairman of MLSListings. A few years ago, lenders with second or third liens might take 10 cents on the dollar. “Now they are saying, ‘If I wait, I will be made whole.’”

Best on the block

In San Francisco, few homes have languished for more than six months. One that has is 489 Harrison St. No. 405, a three-bedroom, two-bath, three-story unit at One Rincon Hill, on the market not quite seven months. The asking price, $2,999,000, is at the high end for the neighborhood, listing agent Eric Johnson said.

The interior was designed by Healdsburg’s Jacques Saint Dizier. The full-floor master bedroom is paneled in American black walnut, and there is a custom, internal elevator. “It just takes the right buyer who appreciates it. My client is not in a hurry to sell,” Johnson said. “I get calls on it every week. We have had offers that were in my opinion very strong. My client decided not to accept them.”

High-end homes take time to sell because the pool of potential buyers is so small. The $8 million house in Los Gatos that has been on the market since 2008 is priced well above homes in the immediate area, listing agent Edward Graziani said. It sits on 31½ acres, making it “a land bank development play.” But most people buying luxury homes in that area are busy tech workers who don’t have time to develop real estate. “They want properties that are plug and play.”

The tech workers also want contemporary, not something that looks like a museum or an Italian villa, says Realtor Olivia Decker. That helps explain why 298 Chestnut St. in San Francisco, a Mediterranean-style home first listed almost a year ago, is still on the market. “Most buyers are new-money guys in Silicon Valley or San Francisco. They want the modern style” with high-tech features like biometric door locks, Decker said.

Sometimes, more average-priced homes also languish. Realtor Mona Skyler has been marketing a one-bedroom condo at 202 South St. in Sausalito for more than a year. Although it has bay views, “it has never been upgraded,” Skyler said. A similar unit that was “redone from ceiling to floors” got an offer in one week. Her unit is listed at $790,000, reduced from $860,000. The seller, who lives outside the Bay Area, “wanted to start at $1 million,” Skyler said.

It’s not unusual for sellers who read about the astronomical prices houses are fetching to overestimate their home’s value, according to Patrick Carlisle, chief market analyst with Paragon Real Estate. But when homes start out too high, buyers take one look and it’s “out of sight, out of mind.”

Many agents urge sellers to cut their price if a home hasn’t gone into contract within 30 days.

Graziani advises buyers to make offers on homes that have been listed for 21 days, just before a likely price cut. That’s when there might be a lull in the competition.

Winkler encourages buyers to check out listings that are 30 days or older because it’s easier to do a “straight-ahead deal” with appraisal and inspection contingencies.

Buyers should “look at listings the market has passed by. Offer what you think it is worth,” Carlisle said. “Sometimes the market passes by a good property for no good reason. If it hasn’t sold because it is overpriced, and you can get it at a good price, it’s fine. If it is a property that 99 percent of the market can’t afford, or has some peculiarity, then it could be riskier.”