Why are so few homes for sale in the Bay Area?

Why are so few homes for sale in the Bay Area? 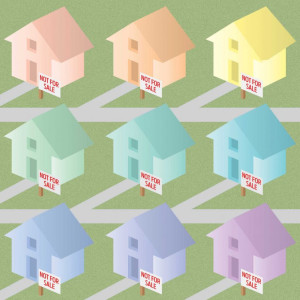 Rain wasn’t the only thing in short supply over the winter. The Bay Area housing market has also been suffering from an inventory drought.

Real estate activity always slows in winter, but the number of homes and condos sold in the Bay Area in January and February were the lowest in seven years for those two months, according to CoreLogic Dataquick.

The plunge in sales reflects a lack of supply, not a lack of demand.

“On well-located remodeled homes (on the Peninsula), you could have eight to 12 offers and probably two will be at asking and the rest will be over asking. The numbers over asking could be hundreds of thousands of dollars,” said Jim Meader, a broker with Today Sotheby’s International Realty in San Carlos.

The Arden, a 267-unit condo development in San Francisco’s Mission Bay, sold out last fall even though owners can’t start moving in until the third quarter of this year, said Alan Mark, president of the Mark Co.

At the current rate of sales, it would take roughly 1.3 months to sell all of the existing homes and condos on the market in San Francisco, according to the San Francisco Association of Realtors. In a normal market, more balanced between buyers and sellers, it takes three or four months.

Everyone knows the supply of new homes in the Bay Area is falling far short of job and population growth, but the number of existing homes being put up for sale is also near record lows in many areas.

In San Mateo County, only 329 single-family homes hit the market in February, the lowest number for that month since at least 1998, when MLSListings Inc. started keeping track. In Santa Clara County, the number was 934, also a record low.

Numbers from Realtor and MLS sources generally do not include new condos because most developers do not list new units on the Multiple Listing Service, or list just a few.

They also do not include homes that never enter an MLS. Realtors say these “off-market” listings are a growing part of the industry and could account for some of the apparent shortage.

But DataQuick numbers include both new-condo sales and off-market listings because it pulls data from county recorders’ offices. And its sales numbers are still undeniably low.

So why is inventory so tight?

The reason you hear most often is that people are afraid to put their homes on the market because they won’t be able to buy another one in the Bay Area.

“The move-up market is pretty much frozen,” said Matt Fuller, an agent with Zephyr. “Even if you can do great on the sale of your property, you are terrified to enter the market as a buyer.”

When that happens, “We negotiate very long rent backs, or they move into temporary housing,” said Ira Serkes, a Realtor in Berkeley.

Some owners are doing what what Dorothy and Michael Catangay did when they sold their home in Gilroy in May. The couple wanted to move to the Villages, a 55-and-older community in San Jose. When they started looking in the fall of 2013, “there were about 10 or so homes in our price range. By the beginning of 2014, we noticed it was down to maybe three or four,” Dorothy said.

Taking the advice of their broker, Quincy Virgilio, they made the sale of their Gilroy house contingent on their ability to get an offer accepted on a replacement home within 21 days. “We were fortunate,” Dorothy said. The couple found a new home at the Villages within two days of accepting an all-cash offer on their Gilroy home.

Inventory is also shrinking because post-foreclosure sales have dried up. “After the bubble burst, foreclosures added to the inventory, especially of affordable homes,” Trulia chief economist Jed Kolko said.

Foreclosure resales accounted for just 4.5 percent of all Bay Area resales in February, compared with a peak of 52 percent in February 2009, DataQuick said.

In San Francisco, the sale of tenancy-in-common units, another affordable option in which two or more parties share ownership, have also plummeted. “TIC sales are down from 724 in 2007 to 295 in 2014,” said Patrick Carlisle, chief market analyst with Paragon Real Estate. The sale of two- to four-unit buildings, which were frequently sold as TIC properties, have also fallen sharply. “I think a lot of this has to do with aggressive changes to tenant-eviction law and condo-conversion laws.”

An influx of foreign owners could also be holding back supply because many see their homes as long-term investments, or a way to get money out of their home country.

Thanks to soaring rents and low interest rates, a growing percentage of people who buy a new home are renting out their old one instead of selling it.

“If you bought a home in 2009 through 2011, at prices 35 to 50 percent below today’s, refinanced your mortgage at 3.5 to 4 percent, and the average asking rent in the city for a 2-bedroom is something like $4,500, it can make very compelling financial sense to rent your home out if you don’t have to sell, especially when CDs are paying 1 percent interest,” Carlisle said via e-mail. “The Airbnb phenomenon can only be adding to this.”

Taxes are also dissuading some owners from selling. When homeowners sell their primary residence, they can exclude up to $250,000 in profit ($500,000 if married) from capital gains tax. In pricier areas, “the capital gains exemption, at half a million, is just a drop in the bucket,” said Ken DeLeon of DeLeon Realty in Palo Alto.

Rather than sell, some elderly homeowners have decided to stay in their homes until they die. When their heirs get the house, its cost basis will be “stepped up” to its value on their date of death, which essentially wipes out tax on the appreciation that occurred during the owner’s lifetime.

In California, homes are reassessed for property taxes only when they are sold or when the owner makes a substantial improvement, which is added to their assessed value. As long as homeowners stay put, their property tax cannot go up by more than 2 percent a year (plus voter-approved local taxes).

Many longtime homeowners would face a steep property tax increase when they sell, unless they qualify for a Proposition 60 or 90 transfer. Under Proposition 58, they could give or leave it to their children (or parents) without triggering a property-tax increase.

Prop. 13 “is a huge disincentive toward selling,” DeLeon said.

For younger buyers, taxes are less of an issue. Although more of his clients are exceeding the capital gains exclusion, “in some cases, the price they are getting is so far above their expectations,” they don’t mind paying the tax. He does, however, think Prop. 13 is affecting the move-up market.

Although sales and listings typically pick up in March, it probably won’t be enough to keep up with the Bay Area’s seemingly insatiable demand for housing.

At some point, prices will get so high that buyers give up or sellers cash in. “Every owner has a price at which they will sell. As prices go higher and higher, I think we will see people willing to sell,” Fuller said.

Absent an earthquake, stock market crash, recession or other demand-killing event, the only long-term solution is to build more housing. That’s hard to do in the Bay Area, where there’s so little available land and so much regulation.

San Francisco has seen a big jump in condo construction and an even bigger increase in apartment construction over the past few years.

Polaris Pacific expects to see roughly 800 condos completed this year, 1,500 next year and 1,500 in 2017. That’s about twice as many as were completed the previous three years combined.

Apartment completions between now and 2017 will total about 7,000, compared with about 4,700 over the past three years.

That will help, but it’s not enough to keep up with the city’s job growth.

The suburbs will also have to overcome their aversion to anything over three stories. “Tech companies seem to be making a permanent commitment to the area,” Meader said. “You can’t get much density at three stories.”

Written by Kathleen Pender and borrowed from the San Francisco Chronicle